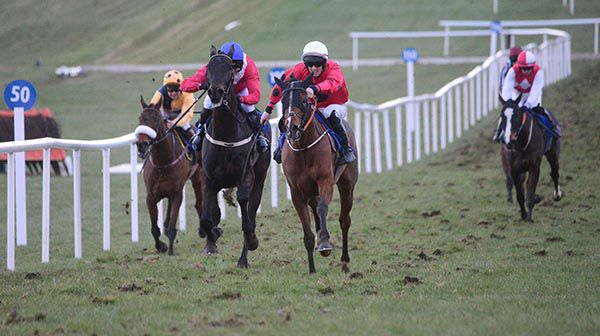 John Cannon came forward considerably from his debut run to land the bumper at Thurles this afternoon.

The Joe Murphy-trained gelding had weakened in the closing stages to finish a well-beaten eighth on his debut at Leopardstown over Christmas, having run keenly, and was held up today in a first time hood.

Evan Dwan started to move closer on the top bend on the son of High Chaparral and he gave chase to the front-running En Beton down the straight.

The 20/1 shot (as big as 50s this morning) got on terms inside the final furlong and went on in the closing stages for a two-and-a-quarter length win.

Murphy said afterwards:- "We were disappointed with him the in Leopardstown but we got the key to him and got him to switch off. The plan was to set out last and get him to switch off and come home as late as he can and it is job done.

"I think he is a nice horse and has a great page and I'd say he'll make a nice dual-purpose horse and I wouldn't see why he wouldn't run on the flat.

"I don't know how good today's race was and he'll hurdle during the summer if the owner doesn't sell him.

"Evan Dwan rides out with us every morning, he was with Pat Doyle and is a good chap. He is going to America at the end of the month but whether that'll change his mind or not I don't know."