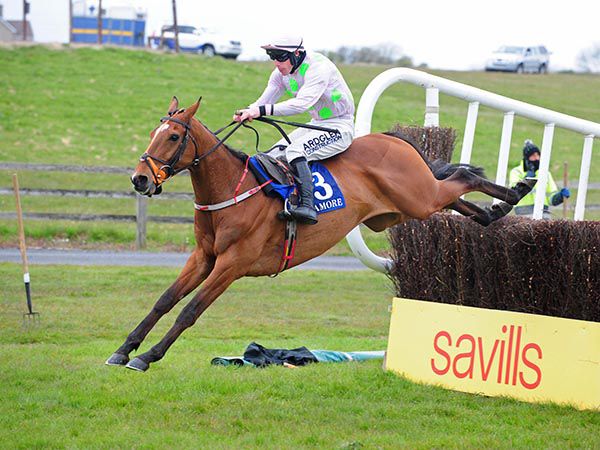 There was a Sunday afternoon treble for Willie Mullins and a double for Brian Hayes when in the Tramore Racecourse Directors Chase Bapaume justified 11/8 favouritism.

Mullins and Hayes started the day as they were to go on, combining for a win in the opener with Gelee Blanche, whilst it was Conor McNamara that rode Closutton winner number two, En Beton.

Bapaume tracked the leader in second, and he led five out. He went clear travelling well two out, staying on strongly on the run-in and eased close home to easily beat Us And Them by eight and a half lengths.

"We saw the conditions of the race and it was a nice opportunity for him to come back over fences. It's a nice double for Brian too," said Mullins.

"Going that little level lower than previously has given the horse plenty of heart and confidence to race again. Brian said he was really enjoying his jumping. We'll probably go back over hurdles at Punchestown, possibly for a handicap hurdle if he comes out of this well.

"Otherwise we can look over the next month for a similar type of race down the country. Even though the timing isn't right to go to Punchestown, he mightn't have had as hard a race as normally with Spyglass Hill making that mistake and the race falling into his lap a bit."

The Stewards interviewed Ian Almond, Authorised Representative for Mrs. Denise Foster, trainer of Swordsman, concerning the late withdrawal of his charge owing to the ground. The Authorised Rep reported that he intended to run his charge who was present at the track but having concerns about the ground in the home straight he withdrew his charge. Having considered his explanation, the Stewards allowed the late withdrawal on this occasion and took no further action.