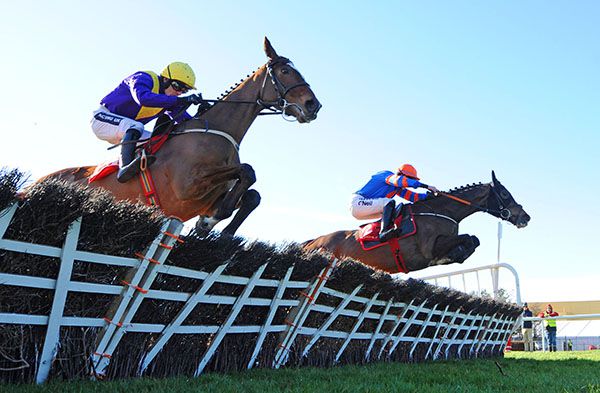 The keen going Cilaos Emery took over from his Willie Mullins stable companion Camelia De Cotte from the second last.

However Mick Jazz was soon on his case.

In the words of Kennedy "he just ran down the last a bit and I thought maybe I'd struggle to get back up," but 'back up' Mick Jazz got after a thrilling conclusion up the run-in, for a neck verdict.

The front pair left Sire Du Berlais (also representing Gordon Elliott and not always fluent with his jumping) seven lengths back in third.

A 27,000 pound purchase by Aidan O'Ryan and Elliott out of the Harry Fry yard back in August, Mick Jazz has turned out to be a fine recruit for the Cullentra House team.

"It was a good performance. We were toying with going to the Betfair Hurdle next week but we felt a winner in Ireland is more important. He won't run next week now, and we could look at something like the County Hurdle in Cheltenham," said Elliott.

"I knew he'd go to the turn-in on the bridle but you always wonder what they will find off it. In fairness he had to pull out all the stops to beat the other horse."

Upset in our opener - Cilaos Emery loses his unbeaten record as Mick Jazz prevails in a cracking finish in the Listed novice hurdle: pic.twitter.com/PnFZA4zuvJ