Mick picks up the pieces as Faugheen pulls up 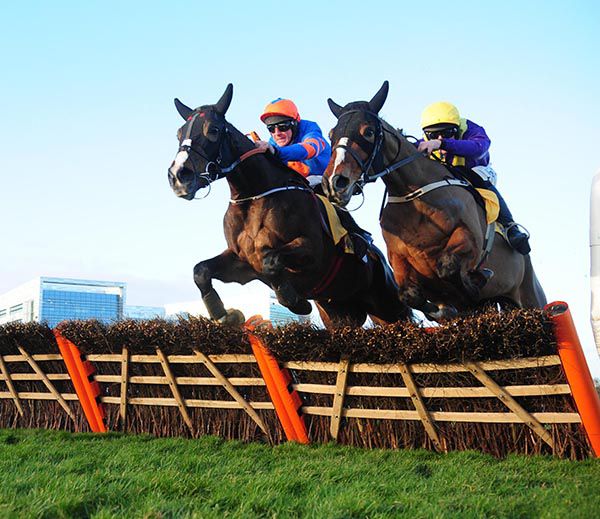 Very little has gone according to plan at Leopardstown this week, and that continued in the Ryanair Hurdle, with the 2/11 favourite Faugheen pulling up before the second last.

This left the door open for Mick Jazz and Cilaos Emery, with the former outstaying the latter on the run-in to provide trainer Gordon Elliott with a quick Grade 1 double.

The six-year-old victor was returned a 14/1 chance, with Davy Russell doing the steering on the grey gelding.

Elliott, who won the previous contest with Shattered Love, said afterwards: "Obviously Faugheen looked to be a certainty but there is no such thing as a certainty in horse racing. I just hope he's okay.

"It was Mick Jazz's day. We went to Cheltenham last year and George Mahoney, who owns a half share with me, flew over with all his family for the County Hurdle last year and he was lame on the morning of the race.

"Today was his day in the sun. The plan was to go to America next year for all those jump races but we'll enjoy today and see what happens.

"George is a big owner in America. He's a good man and he's got a few horses with me. It's nice to repay him.

"We bought him out of a dispersal sale in Doncaster. I bought him with the plan to go to America but we just had a few little niggly problems. I'm glad he didn't go now.

"He'll have to entry now in the Champion Hurdle because you never know but we'll enjoy today first.

"There was no race to run him in, this was the only race we could really run in and we were running for prize-money.

"It just goes to show if you're not in these races you can't win them. Today was our day and we're delighted. He's not a bad horse.

"I was sneaking away thinking we'd be second. Then we see Faugheen coming out and I had three in it but Willie still had one in front of me! It's our day today and we're delighted."

Faugheen was dismounted and led back by Paul Townend.

Faugheen dismounted and being walked back by Paul Townend... pic.twitter.com/6prCxDAwkA

The Turf Club Veterinary Officer examined Faugheen, trained by W.P. Mullins, at the request of the Stewards and reported the animal to be post race normal. Samples were taken for analysis.

P. Townend, rider of Faugheen, trained by W.P. Mullins, reported to the Stewards' Secretaries that his mount never travelled and was pulled up thereafter.