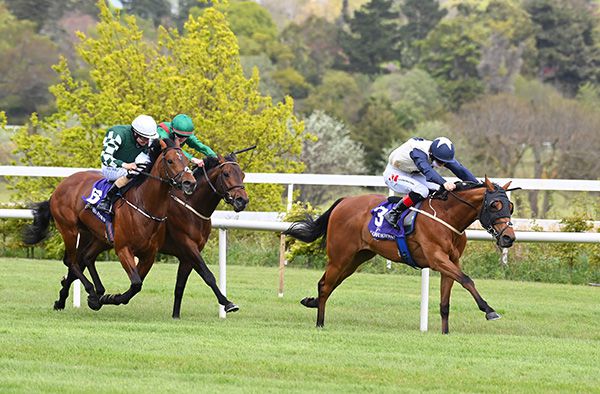 The Ger Lyons-trained gelding scored twice last year at Gowran Park and Tipperary and went close on both previous outings this term including when runner-up to Layfayette in the Paddy Power Irish Lincoln.

Connections decided to fit blinkers for the first time in this mile event and the decision was vindicated as the four-year-old was prominent throughout before striking the front early in the straight.

The son of Zoffany kept on well under pressure inside the final furlong under Colin Keane to beat Erzindjan by a length and a quarter with Ace Aussie just a neck further back in third.

Shane Lyons, brother and assistant to the winning trainer, said “He’s a grand horse who ran well in the Lincoln. Colin said we should put headgear on and it’s worked. He’s a fun horse for his owners.

“He loved the ground and will get further. We’ll probably put the headgear on and off. He just gets a bit lonely and with the headwind today it helped.”

Runner-up to Early Doors in last year’s renewal, the 5/1 favourite Royal Rendezvous went one better in the 2021 Tote Galway Plate in the hands of Paul Townend.

Fitzgerald gets a Galway winner on Desir Du Large

In-form 7lb claimer Shane Fitzgerlad got on the scoresheet for the week as Desir Du Large (10/3 into 9/4 on the show) took the Tote At tote.ie Galway Races Maiden Hurdle.

Annie G too good for the geldings in Listed novice

Annie G (7/2), the only mare in the line-up, was too strong for her six rivals when making all in the Tote Placepot Pays More Novice Hurdle (Listed).