Local winner of the mares' bumper at Gowran 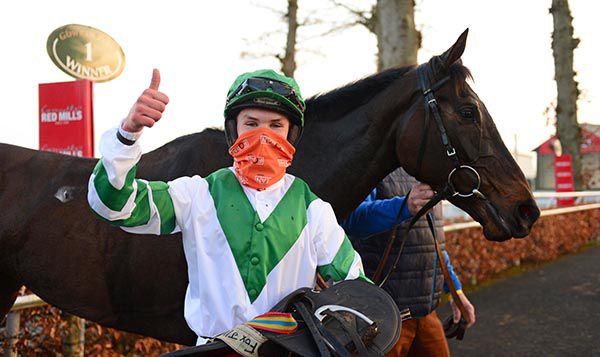 There was a locally -trained and ridden winner of the Ronan Lawlor Memorial Irish EBF Mares (Pro/Am) Flat Race as Jumping Jet ran out a wide margin winner on her debut.

Trained in Old Loughlin Co.Carlow by Barry Fitzgerald, the daughter of Getaway attracted some good support in the market, shortening from 25/1 to 14/1 in the show, and with much bigger prices having been availed of earlier in the day.

In a race where the field was stretched from an early stage, the winner took over five furlongs out and kept up the gallop on the very testing ground to score by 29 lengths from Choice Of Words (6/1). Eyre Square (4/1) took third spot, a place ahead of the 5/2 favourite Ardera Ru.

The winner was partnered by 17-year-old local rider Kieran Callaghan for whom it was a first success.

Winning trainer Barry Fitzgerald remarked: “She’s a tough filly. There are no schooling bumpers at the moment and I thought other fillies with experience would catch her out but she was straight enough there.

“I always thought a lot of her at home and is a nice filly going forward.

“She would be entitled to step up to a Listed race now if she is not sold. She galloped out well to the line.

“I’m delighted for Kieran (Callaghan) who is a good lad. He rides out on Saturday and Sunday and at lunchtime when he works in Willie’s (Mullins). It just shows if you put in the hard work you get the rewards.”