La Chanteuse shows her true colours for the Crawfords 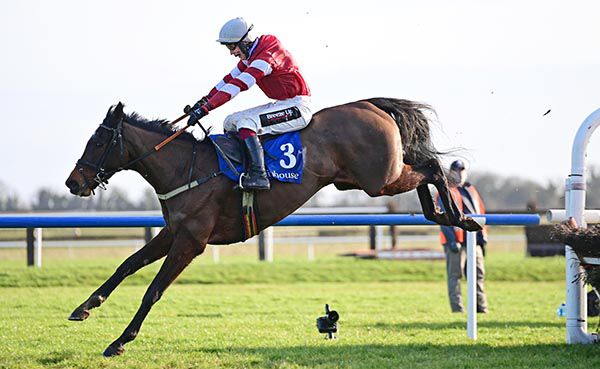 A 10/1 chance on this occasion the successful Scorpion mare bounced back from a disappointment at Down Royal last month to see off odds-on chance Manitopark Aa by six lengths.

The runner up is proving expensive to follow in Ireland as she was only fifth at odds of 5/6 at Navan six weeks ago.

“We've always thought plenty of her. On her first run back at Down Royal Ben rode her and he was disappointed with her,” said Crawford.

“She probably really needed it as she blew up half way around. She came here today and obviously has come on a good bit from it.

“JJ gave her a good ride and it's great to get it, they are hard to win.

“We were disappointed not to get a bit of black-type with her in her bumpers. We didn't sell her, and she's owned by my mother, so there is a bit of extra pressure on.

“She's entitled to take her chance in a better race. We could go across the water for a novice but at this point in time we'd probably be trying for a bit of black-type.”

Mr D.L. Queally, rider of Merry Doyenne trained by Declan Queally, reported to the Clerk of Scales that his mount choked in running.

The Stewards requested a report from S.R.B. Crawford, trainer, as to the apparent improvement in form of La Chanteuse, placed first, as compared with its recent run at Down Royal on the 17th December. The trainer reported that this mare had been very consistent except for her most recent run. He explained that the mare was making a reappearance at Down Royal following a long layoff, blew up before the home turn and weakened from that point. In his opinion the changed tactics today whereby she made the running and the improved fitness helped about bringing about the return to her consistent form. Having considered the evidence the Stewards noted the content of the report.

The Stewards enquired into the running and riding of Merry Doyenne, ridden by Mr D.L. Queally, and trained by Declan Queally. Evidence was heard from the rider concerned. Mr D.L. Queally, stated that his father had acquired this horse to train about six weeks ago. In training she was noted to be a big mare of a hot temperament and a poor feeder. The intention today was to jump off towards the rear of the field, let her tip away and to finish as well as she could. On a review of the video, the rider explained to the Stewards that he personally had not ridden for three months, had been dieting to do the weight and had only returned to riding out in the past two weeks. He added that his mount had begun to choke from the third last hurdle with it becoming more prominent in the straight but overall he was happy with the run. He concluded by stating that he had felt his lack of race riding fitness during the latter stages of this race. He confirmed to the Stewards that he was training this mare under his fathers licence. Glen Norris, Authorised representative for Declan Queally (Trainer), informed the Stewards that he transported the animal here today but was not made aware of any riding instructions. The Stewards also received a report from the Irish Horseracing Regulatory Board Veterinary Officer who stated that Merry Doyenne was post race normal. Samples were taken for analysis. Having viewed the recording of the race and considered the evidence, the Stewards were of the opinion that the trainer was in breach of Rule 147 (v) by failing to make the Authorised representative fully aware of the riding instructions. Consequently they were unable to complete this enquiry which was held under Rule 212 and therefore referred both matters to the Referrals Committee.