Kitten comes out on top in Naas Grade 3 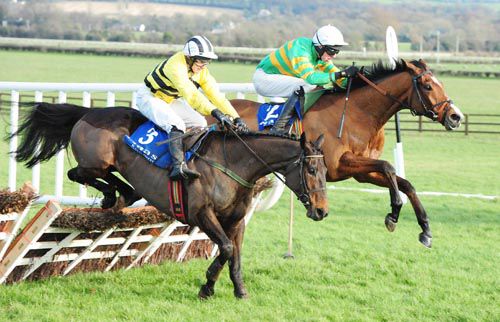 Already Graded placed Kitten Rock (4/7) continued his rise up the ranks when landing the odds in the Grade 3 Limestone Lad Hurdle at Naas.

Mark Walsh got a great run on the inner, to take up the running in this two mile three furlong contest, entering the straight.

That mare came up well for her rider at the last, to give herself every chance, but she pecked at the back of the flight and it was effectively then game over.

The J P McManus-owned and Edward O'Grady-trained Kitten Rock then stayed on well up the run-in to triumph by three and three parts of a length.

"As a four-year-old, and going into a five-year-old, he's been difficult to place. We have tried to stay under the radar as much as possible, and the plan has gone well so far. He'll go next for the Red Mills," disclosed O'Grady.

"He jumped brilliantly, which he did also at Limerick, and it was nice to see a gap of 18 lengths back to King Of The Picts in third. The mare (Glens Melody) is good so the form stacks up well.

"I'd be very hopeful that going back to two miles with a faster pace will suit him."

Boylesports left Kitten Rock at 33/1 for the Champion Hurdle. (AM & EM)