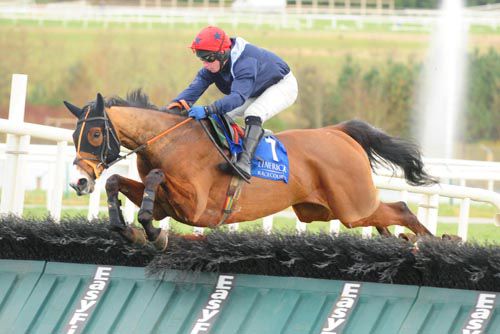 Kitten Rock was sent off at 1/5 to land the opening two mile hurdle race in Limerick and the French import did it in good style as he came home by seven lengths.

The four-year-old trained by Edward O’Grady had scored by 12 lengths on his Irish debut in a Navan maiden hurdle at the start of the month.

He was quickly into the lead today and despite a couple of jumping errors stayed on well for a comprehensive seven-length success.

Irish Bulletin, on his hurdling debut for local trainer Eric McNamara, attempted to challenge Kitten Rock coming to the second last, but could make no impression and had to settle for second at 8/1. He was two and a quarter lengths in front of Black Ice.

Jockey Patrick Mangan said: “He’s a good horse and he gave me a good feel. He wasn’t hectic at the last. He’d probably appreciate it if he had more company.”

Kitten Rock won on the flat in France last summer.