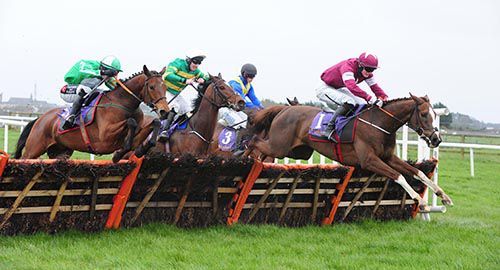 The www.kilbegganraces.com (Pro/Am) INH Flat Race makes for an interesting end to proceedings as the County Westmeath track stages its second meeting of the year.

Some of the newcomers here bring eyecatching pedigrees to the table - Dino's Dream, for instance, is a half-sister to last summer's Royal Ascot heroine Jennies Jewel.

Ticonderoga is a son of Robin Des Champs who also boasts a nice page, and starts off for owner Patricia Hunt and trainer Noel Meade. Barry Reynolds will partner this fellow.

But With Danny Benson aboard, it looks as though the first string for Mrs Hunt and Meade is former point-to-pointer Major Destination.

Major Destination's dam Clara Allen was a very smart racemare, as she showed when triumphing in the 2005 Irish Cesarewitch at the Curragh.

Her mating with Dubai Destination produced Major Destination, and he showed that he is not devoid of ability when finishing second at Dromahane almost a year ago.

He lost out by just a short head on that occasion, when in the care of Paul Cashman. Acquired subsequently by present connections for 32,000 pounds, the Tu Va Stables representative seems likely to enjoy the lively underfoot conditions here.

Or Jaune De Somoza is entitled to head the betting for this two-miler. When he finished second at Tramore, Henry de Bromhead's charge had two subsequent winners in behind.

His owners Gigginstown House Stud like to have winners at their local venue, and they could also take the Tullamore Maiden Hurdle, either with the De Bromhead newcomer Schmidt, or with Gordon Elliott's Leomar.

De Bromhead also has definite hopes in the feature race of the evening, the Belvedere House, Gardens & Park Handicap Chase.

He sends out Riviera Sun under Mark Walsh for JP McManus, and Double Island for Julian Taylor in the hands of Andrew Lynch.

Jaime Sommers won her maiden hurdle on this programme a year ago and perhaps she can go in again when she contests the Irish Stallion Farms EBF Handicap Hurdle at 6.20.

The four runners in the Irish Farmers Journal Novice Hurdle are last-time-out winners - three of them at this venue.

Robin Des Foret will be fancied to emerge best for Willie Mullins and Paul Townend.