Global Equity cashes in at Limerick 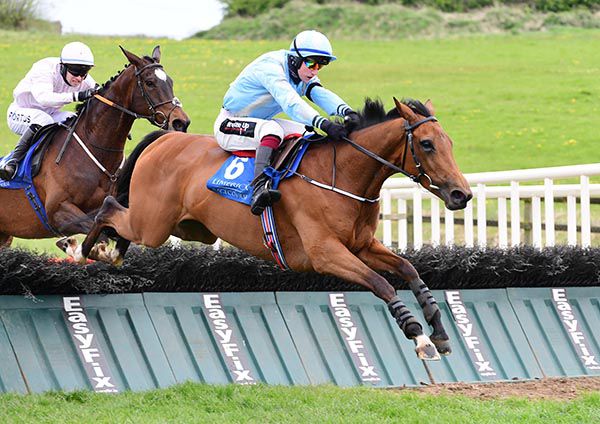 Joseph O'Brien's Global Equity made the breakthrough over hurdles at Limerick in the hands of JJ Slevin.

The 1/3 favourite tracked Nymphhall in this extended two mile three furlong mares' maiden hurdle and moved to the front before the fifth flight.

She had most of her rivals cooked turning for home as only Eyre Square and Chernikova were able to keep pace in second and third respectively.

The leader jumped the second last well and Eyre Square (5/1) was soon ridden in second. Global Equity was driven out by Slevin on the run-in to account for the runner-up who made no inroads.

There was a length and a half between the pair, and three lengths more back to Chernikova (16/1).

Slevin said: “It looked a good opportunity for her beforehand and she got the job done. She jumped well and travelled nicely. She was a little bit idle in front but has done it well.

“The ground is just on the slow side of good. They got a bit of rain and put a bit of water on it. It’s lovely safe ground.

“She might jump a fence. I don’t know what Joseph’s plans are but a little mares’ chase over the summer would be no bother to her.

“She’s still a novice until the winter as well so she has options.”

Global Equity had built a rating of 125 over flights on the back of six placed efforts including when beaten a neck into second in the Grade B mares' handicap hurdle at the Dublin Racing Festival.

This was a drop in class from her fifth place in a Grade One mares' novices' hurdle at Fairyhouse earlier in the month.

The Stewards enquired into the running and riding of seventh-placed Delightfantastic, ridden by A. McCurtin, and trained by John J. Walsh. Evidence was heard from the rider and trainer concerned. A. McCurtin, stated that his instructions were to take his time and get his mount to settle. John J. Walsh, confirmed the instructions given. The Stewards also received a report from the Irish Horseracing Regulatory Board Veterinary Officer who stated that Delightfantastic was post-race normal. Samples were taken for further analysis. Having viewed the recording of the race and considered the evidence, the Stewards were satisfied that both rider and trainer were in breach of Rule 212.A(ii) and having considered their respective records in this regard, the Stewards suspended A. McCurtin, rider, for 21 race days and ordered that he forfeit his riding fee and they fined John J. Walsh, trainer, three thousand euro. Furthermore, the Stewards, pursuant to the provisions of rule 212C,(d) suspended Delightfantastic for a period of 60 days.

Aidan O’Brien has paid tribute to Santa Barbara, after the hugely talented filly died as a result of a worsening pelvic injury.

The 7/2 favourite Sea Appeal made all to win the Treo Eile Retraining Ireland's Racehorses Handicap for trainer Sheila Lavery.

Nayef Road was rewarded for a string of fine efforts in top company when making every yard of the running in the Jockey Club Rose Bowl Stakes at Newmarket.

Empyrea (9/2) built on a good placed effort at Gowran earlier this month as she won the Behans Horseshoe Bar, Restaurant & Townhouse Maiden.