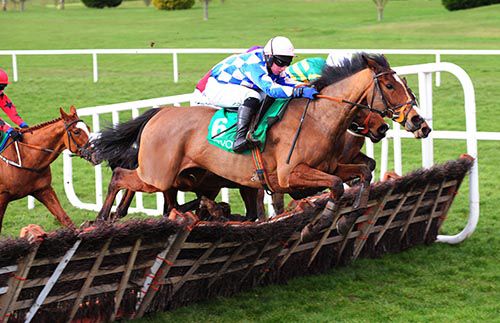 Edward O'Grady introduced a grand four-year-old from France, in the Simon Davis colours, at the point-to-point in Bellharbour recently, in second place finisher Capbreton, but a better one for the same connections came on the Irish scene today at Navan in the shape of Kitten Rock. He landed the opening Racing 16th March Maiden Hurdle.

Paddy Mangan rode the Laverock gelding, previously twice a winner on the level in his native land, like a good horse.

The market hinted in advance that Kitten Rock could be good too as he was backed from 3/1 into 2/1 as favourite Halling's Treasure (eventually went off at 11/8) proved uneasy, and disappointed in fourth.

Kitten Rock meanwhile, got a waiting ride, he was switched to the outer before two out, led at the last and asserted on the run-in for comfortable seven length win over Shutter Island.

O'Grady divulged: "He's done lots of schooling but he's never really galloped since he's joined me – because of the weather.

"On what I'd seen of him at home though I knew he was very nice.

"I've never really let him down so there must be plenty of improvement there.

"He'll probably go to Limerick now for a winners of one on St Patrick's weekend and we can make further plans after that." (AM & EM)