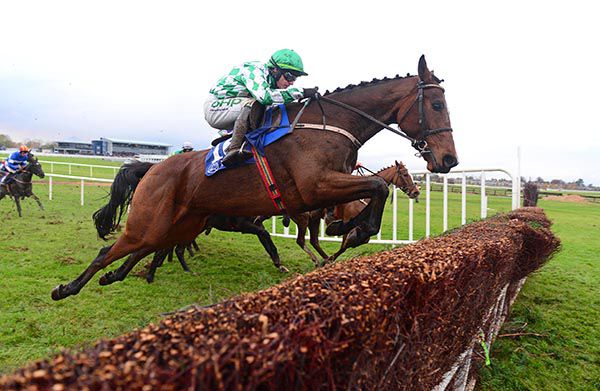 Mullins was in Flemington, Australia for True Self's 3.10am win in the Group 3 Queen Elizabeth Stakes, a flat handicap, and while his Cilaos Emery and then Elixir D'ainay won comfortably enough at Naas, Tornado Flyer's success was less than straightforward.

Four horses exited at the first fence in the race, including fallers Cracking Smart and second-favourite Dommage Pour Toi. Tornado Flyer himself almost laid waste to the seventh fence but recovered and on the run-in was made work initially by stablemate Voix Des Tiep, which finished third, and then Choungaya, which second close home and got to within three parts of a length of the winner at the line.

Tornado Flyer's jockey Paul Townend had earlier steered Cilaos Emery to win and following this second success today win reported “it was hard to get into a rhythm with the loose horses and he was fresh in himself. I was lucky to survive the mistake but at least he learned from it.

“He was good and brave over the last two and will come on for it like most of ours.

“We didn’t get a clear run with him last season. He’s a high-class horse and I think he can only build on that. He had a couple of blows and he was gassy early on but he warmed up to it.

“Danny (Mullins) did all the schooling with him and was delighted with him. Jumping won’t be a problem to him and that mistake opened his eyes and he didn’t do it again.”