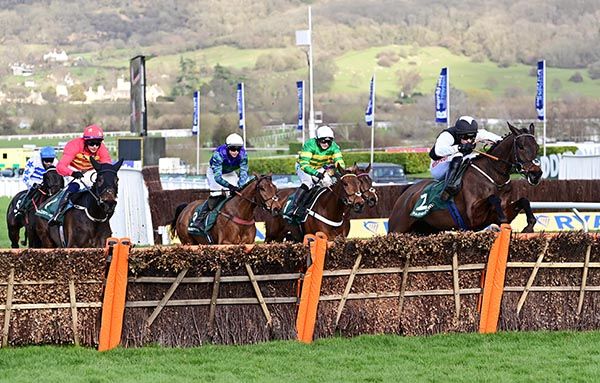 Flooring Porter put up a brilliant performance to make all the running and repeat last year’s win in the Paddy Power Stayers’ Hurdle at Cheltenham.

Concerns on how Flooring Porter would react to a massive crowd after winning in near silence behind closed doors were allayed, as the Gavin Cromwell-trained seven-year-old put paid to the opposition.

Flooring Porter (4-1) was given a superb ride by Danny Mullins to join the elite band of multiple winners.

He enjoyed an easy lead with Mullins able to control the race throughout and had enough in hand to see off his rivals at the business.

Flooring Porter ran out a cosy winner by two and three-quarter lengths from Thyme Hill with Paisley Park the 2019 winner, a nose away in third.

Cromwell said: “The plan was to make it, but of course he has the issues with the start. We wanted to make the running and he was foot perfect everywhere.

“Danny was fantastic on him, when he jumped the third last he eased off and let him fill up, but to be honest I was worried he might get done for a turn of foot. Danny was cool though and knew what he was doing.

“I wasn’t too bad when he was down at the start as I was pretty confident he was going to be OK today, he seems to have matured and he’s behaved himself all the time he’s been here.

“At Leopardstown (at Christmas) Klassical Dream got a flyer and we didn’t and it made the difference, he was beaten just over two lengths. We didn’t want the same to happen in this race.”

Cromwell hailed Mullins’ ride, adding: “Danny is so good on front runners, he has a serious clock in his head.

“He maybe did get an easier lead this year, whether they might not have felt he was as good as he was I don’t know.

“His jumping is unbelievable, he jumps more like a champion hurdler, he’s so slick, long or short, he gains ground at every hurdle.

“Last year was great but the crowd here is magic. I came here and won the Champion Hurdle with Espoir D’allen but he was an outsider, to win a big race with a fancied horse was brilliant, it all worked out.

“We’ll try to get him back here next year.”

Mullins added: “Everything went to plan. Big credit has to go to Gavin Cromwell, I love the horse but he’s quirky. His training is the reason we’re back here today again, Gavin’s done a fantastic job with this lad all year.

“I wasn’t too worried about the preliminaries, the more he gets into the season, the less gas is in his system. Gavin brought him over a few days early, he was a little bubbly one or two mornings but this morning we were very happy with him. He was relaxed and showing a spark again.

“It’s funny going into a race at Cheltenham with such confidence in the horse but we believed in him.”

Philip Hobbs felt better ground would have helped Thyme Hill, but was nevertheless pleased with his effort.

“A bit better ground might have helped us. I’m not sure where we’ll go now. It would be nice to go to Aintree for the race he won last year, but it’s only three weeks away so we’ll have to see how he is.

“Punchestown is a possibility as well.”

She said: “He’s run fantastic, he really has.

“He was flat out and just galloped. He was still the fastest up the hill, he just couldn’t be fast enough through the race.

“I’m just so proud of him. This is the fifth Festival he’s run at in a row and for him to continue to run the races that he runs, he’s just a very special horse.

“He was closer this year than he was last year to Flooring Porter and was a nose off being second.

“He has the heart of a lion this horse and he loves it — and actually behaved impeccably today.

“Aidan (Coleman) said he needs the soft ground to slow everybody else down a little bit, but he’s probably better on the nicer ground when everything happens a bit quick for him.

“Today was arguably a better run than last year, so if he continues in this vein, he’ll keep going.”