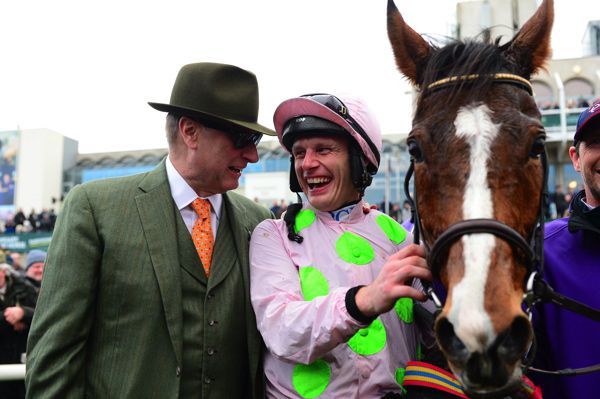 Faugheen sparked scenes of unbridled joy on day two of the Dublin Racing Festival at Leopardstown when digging deep to land the Flogas Novice Chase.

The former Champion Hurdle winner has taken well to fences in the twilight of his career and made it three wins from three chase starts this term in this 2m5f Grade 1 event.

The 12-year-old tracked the pace set by fellow 13/8 joint favourite Battleoverdoyen and headed that rival after two out.

Faugheen’s stablemate Easy Game threw down a strong challenge at the last and Paul Townend’s mount had to really battle on the run-in to prevail by half a length.

Tornado Flyer was six lengths back in third and Castlebawn West made it a 1-2-3-4 for champion trainer Willie Mullins.

Battleoverdoyen was beaten when falling at the last.

The large crowd rushed to the parade ring to greet the winner who was given three cheers amid raucous celebrations.

A delighted Mullins said, “It’s probably one of the most special winners that I’ve ever had.

“I should have sent him over fences last year and I got sidetracked. I didn’t want to retire him without going over fences as that is what we bought him for. Look what he can do now at 12. I should have gone earlier but there you are.

“People want to retire horses at 10, 11 or 12 but to me they have plenty of life in them if they haven’t used up the mileage as younger horses.

“They can go much longer than people think and he’s the living proof of it.

“He’s got stamina, he’s got speed, he can jump. He’s got the whole package and a will (to win) a bit like Un De Sceaux. They both want to train and get at the job, and you are really trying to not let them do too much. They have a huge attitude to racing and training.

“I would have been gutted if he was beaten today. A lot of people think if you take him on he will fold but he’s after showing in his last three races that he doesn’t.

“I’m going to enjoy today and we’ll leave any plans for another day.”