Donoghue delivers despite 'twists and turns' 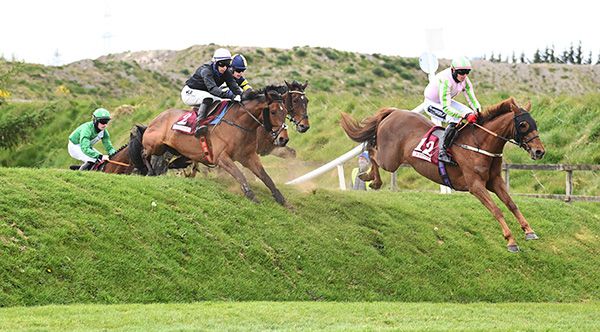 Donoghue steered leader Call It Magic the wrong side of a marker after jumping the Mongey stone wall in Thursday's La Touche, causing mayhem in the marathon, but today wisely followed the Enda Bolger trained front-runner My Hometown, under Brian Linehan.

Tiger Roll's jockey Donoghue produced Call It Magic with a well-timed challenge to lead jumping the final fence and on the run-in held runner-up Ballyboker Bridge, by half a length, with a length to third-placed My Hometown.

Winning trainer Ross O'Sullivan, a son-in-law of RTE pundit and trainer Ted Walsh, later reported “I got an unbelievable kick out of that. I can't believe it, he hasn't won a race for four years. All the drama the other day and all the effing and blinding that went with it - I'm in shock!”

He added “racing is so funny with the twists and turns. Myself and Keith were at loggerheads with each other on Thursday but we're back today and he gave the horse an absolute genius of a ride.

“He's a horse that struggles to keep going sometimes when he comes off the bridle. Fair play to Keith as it was a masterclass of a ride and I'm over the moon to win the banks race. He battled and jumped brilliant.

“I won it as an amateur for Ted and this fella has been a great servant to us. He's 11-years of age and has won six races now, we have him since he was three.

“I didn't think he'd win another race, I thought he was coming to the end of his tether. I can't believe it and it's the best kick I've got in a long time.

“It's like a drug and you couldn't bottle it.”

Well-backed Lady In Red in number one spot again

De Lady In Red was the one for money in the morning (from as big as 9/2) and got the job done in the Try Racing TV For FREE Now Mares Maiden Hurdle.

Having made the breakthrough on her previous start at Clonmel in June, Romella (12/1) followed up off a 7lb higher mark in the Athlone Handicap Hurdle.