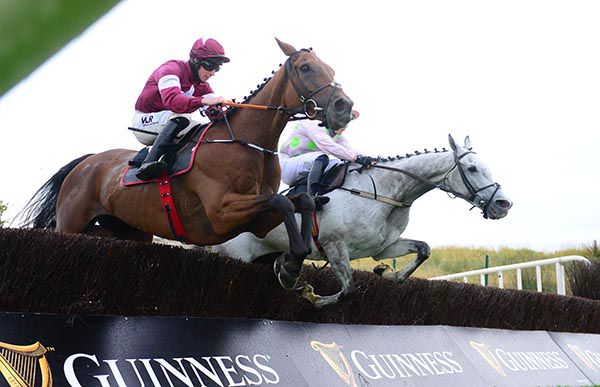 A Grade 1 victor in December of 2019, the Denise Foster trained eight-year-old had been ultimately disappointing since winning at Down Royal in October of last year.

Thirteenth in the Galway Plate, the son of Doyen managed to reverse the form this evening, getting the better of Ben Dundee and Koshari, who both finished ahead of him in the Wednesday highlight.

Settled in second by Jack Kennedy, the bay victor improved to lead away from the last and while strongly pressed by Ben Dundee inside the final furlong, he battled on gamely under pressure to prevail by half-a-length.

The runner-up was returned an 11/2 chance under Ricky Doyle for Gearoid O'Loughlin, while the front-running Annamix (7/4f) was another eight-and-a-half lengths back in third.

Foster said in the aftermath: "I'm so happy because he just lost his way a bit but really enjoyed today. He jumped like a buck and travelled well and I think he liked the space.

"He battled today, which he hasn't done recently and that could be the turning point again."

Butterflyvespiere was delivered with a well timed challenge by James O'Sullivan to land the second division of the Irish Stallions Farms EBF Mares Handicap Hurdle at Listowel.

Ryan hits 30 for season as Kilashee proves tough in front

Kilashee stole a march on her rivals when making all to land the first division of the Irish Stallions Farms EBF Mares Handicap Hurdle at Listowel.

Made bounces back to winning ways

French Made bounced back to wining ways when staying on stoutly to claim the Irish Stallion Farms EBF Mares Hurdle at Listowel.