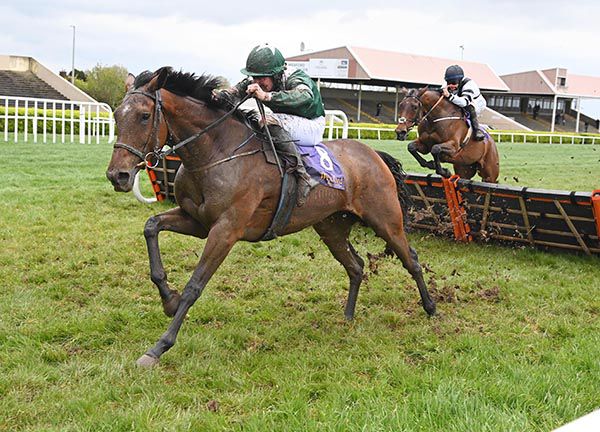 Declan Queally had an agonising 48-hours prior to winning the Support The Irish Injured Jockeys Hurdle at Wexford today with smart mare Merry Doyenne (11/8f), which eventually rewarded the jockey/assistant-trainer's endeavours.

Queally, son of Merry Doyenne's official trainer Declan Queally, steered the Doyen-mare to win at Killarney 11 days ago and today, with another polished ride, the pair beat Sovereign Gold by two and three parts of a length.

Queally had Wexford weather and weight worries prior to today's race and having successfully sweated to ride at 10st11lbs, later joked “it wasn't easy, it was a tough two days, fairly bad form but thankfully it has paid off!”

An 8am track inspection added to his woes weather-wise, and he added “when it was raining all night, I was just praying racing would be on today, but we were lucky the rain was so heavy.

“It was a risk running her again so soon, but the owners assured me that it wouldn't have been the end of the world had she not won today because they are keeping her.

"She suffered that ban (running and riding ban for her January debut) earlier in the year and hasn't had much racing and is a beautiful mare to have and we are delighted to have her.

“There should be plenty of days in her, she is a good staying mare and her half-brother (Canelo, fell) ran in the Aintree National.

"That's it now with her. I said that after Killarney but it definitely will be now. She will be back for the black-type races and then go chasing the following year."