Asthuria out for Punchestown prize 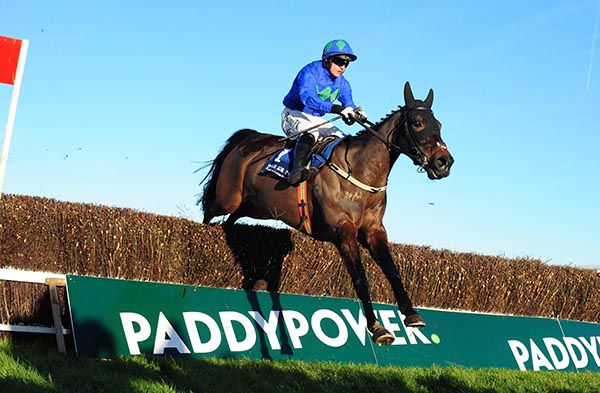 Asthuria can take advantage of a drop in class when she contests the Panoramic Restaurant Handicap Chase over two miles at Punchestown on Wednesday.

She outran her 20/1 odds when third in the Grade One Ryanair Novice Chase over course and distance last month behind the top-class Footpad.

Willie Mullins’ charge has previously won on the forecast good going and is partnered by the in-form David Mullins.

Mr Fiftyone, who landed this race two years ago and was third last year, looks the danger on drying ground at a venue where he has been successful twice.

Mullins’ Robin Des Foret is a tough sort who will take plenty of beating in the La Touche Restaurant Novice Chase.

Recent Down Royal winner Peace News can keep him honest, though.

Noel Meade is in a rich vein of form and it could continue with Glenwood For Ever in the Irish Stallion Farms EBF Handicap Chase over three miles.

The 10-year-old gelding won twice on good ground when trained by Paul Gilligan.

Punters are faced with a full field of 25 horses in the Kildare Hunt Club Maiden Hurdle, but Daybreak Boy makes plenty of appeal.

His fifth place in a maiden hurdle at Gowran Park is more than decent form as that race has thrown up a plethora of winners.

The Punchestown For Events Mares Maiden Hurdle sees another maximum field and Awayinthewest might snap a run of placed efforts.

Running In Heels has prospects of following up on her Kilbeggan victory in the Punchestown.com Handicap Hurdle.

City Island could be a shade of value in the Punchestown Event Centre Flat Race as his debut runner-up finish, at 33-1 over course and distance last month, was laden with potential.

The Mullins-trained Castle North is the one to beat after a pair of second places.