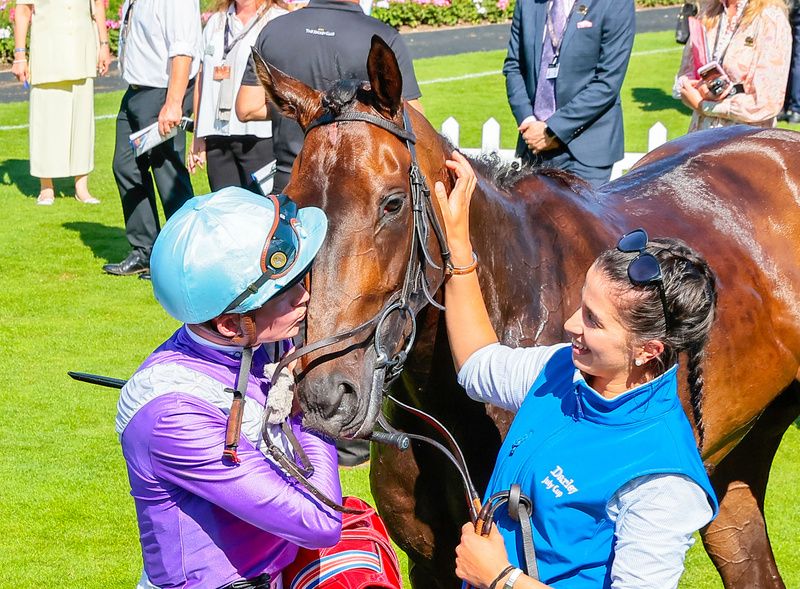 Alcohol Free is set to continue her racing career in Australia after the multiple Group One scorer changed hands for 5.4million guineas at Tattersalls on Tuesday.

Trained by Andrew Balding for owner Jeff Smith, the daughter of No Nay Never was a top-level winner in each of the last three seasons, winning the Cheveley Park Stakes as a juvenile, both the Coronation and Sussex Stakes at three and then successfully dropping back to six furlongs to win this season’s July Cup as a four-year-old.

Bidding started at 1m guineas and quickly spiralled upwards, with BBA Ireland eventually having the final say on the bay filly, who was bought for €40,000 as a foal.

BBA Ireland’s Michael Donohue said: “She is going to race on in Australia. She vetted unbelievably clean for a filly with plenty of miles on the clock.

“Obviously the racing in Australia, the prize money is huge this year -I think 87 races worth a $1m plus — so we hope to recoup a lot of what we paid for her and maybe add a bit to it.

“She would probably race on for another year I’d say and then there’s a good chance she would come back to Frankel.”

The second day of the Sceptre Sessions produced a series of big-money results, not least the sale of dual Group One winner Saffron Beach for 3.6m guineas.

The daughter of New Bay has won six of her 13 starts for Jane Chapple-Hyam, including the 2021 Sun Chariot and this year’s Prix Rothschild.

Knocked down to Najd Stud, Saffron Beach will stay with Chapple-Hyam to be trained for next year’s Saudi Cup.

The trainer told www.tattersalls.com: “I am thrilled and very excited. It is a big honour, we have got a good winter to look forward. I think going around the ring she was waiting for the saddle, she was giving a few bops with her backend!

“She is in good order, she is tough, I believe she will get the nine furlongs in Saudi, (you) never know about the surface but we will give it a go.”

Saffron Beach is entered at the upcoming Hong Kong International meeting, but Chapple-Hyam added: “I think we will have a little rest and then build her up and get her ready.

“I will have to do a very good racecourse gallop with her. When I sent her to Dubai World Cup meeting, I felt that, although we ran fourth and went well, the ones who finished in front and had had a run, I am aware of that.”

Prix de l’Abbaye winner The Platinum Queen was a wildcard entry for the sale and she sold for 1.2m guineas to Katsumi Yoshida of Northern Farm.

A 57,000 guineas purchase in April, the Cotai Glory filly won four of her eight starts for owners Middleham Park Racing and trainer Richard Fahey, although she disappointed on her final start of the year at the Breeders’ Cup.

Northern Farm’s Shingo Hashimoto said: “We haven’t decided yet, but there is a possibility that she will race on.

“She can’t race in Japan, so if she’s going to race she’ll stay in Europe. She’s a good horse, she’s a fast horse and her results are very good.

“She’s one of the best two-year-olds in the world so she’s very attractive. With her speed she might suit a stallion like Lord Kanaloa.”

Desert Berry, the dam of this year’s Derby hero Desert Crown, was sold to MV Magnier for 1.9m guineas carrying a Nathaniel full sibling to the Classic victor, while Prix Marcel Boussac second Gan Teorainn was the first lot to reach a seven-figure sum when selling for 1m guineas.

Dual Group Three winner Tranquil Lady went for 2.7m guineas to Godolphin, who also purchased Love Is You, who is in foal to St Mark’s Basilica, for 1.4m.

Group Three winner Ville De Grace was another to command a chunky price, selling for 2m guineas to Lordship Stud.