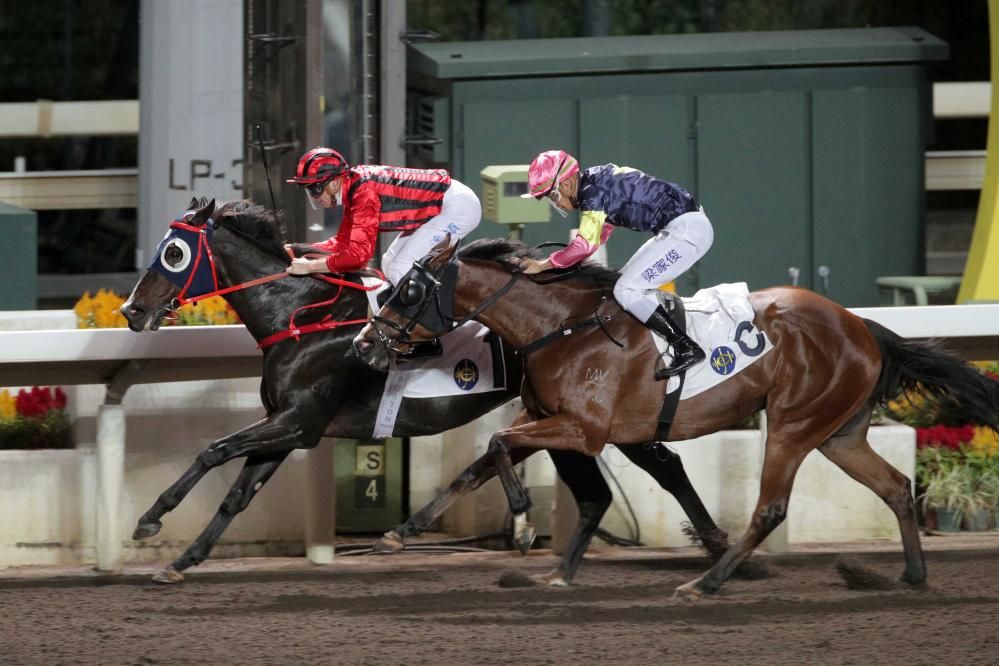 Headed by favourite Apache Pass at the 700m mark, front-running Kings Shield responded strongly to Purton’s urgings in the final 200m to prevail by a neck to post his fifth win over the course and distance — fittingly, at a meeting staged solely on dirt.

Ninth of 13 runners behind Winner’s Man in the G3 Korea Cup (1800m, sand) in Seoul on 4 September, Kings Shield was sent to Conghua by trainer Frankie Lor after returning to Hong Kong before triumphantly resuming on Wednesday night.

Burdened with 135lb, the Scat Daddy gelding stamped his authority on the same race he won last season.

Purton subsequently advanced to a treble which left the five-time Hong Kong champion Jockey with a 17-win lead in the 2022/23 championship over Vincent Ho (14 wins) after the Australian lifted Benno Yung’s Fiery Diamond to a nose margin in the second section of the Class 4 Sha Tsui Handicap (1200m) before again teaming with Yung to clinch the Class 4 Tai Ho Handicap (1650m) with an inspired ride on Yes We Can.

Ho piloted dirt track revelation Super Win Dragon to success in the Class 3 Tsuen Fu Handicap (1200m) for Chris So. Since being switched back to the dirt last season, Super Win Dragon has snared three wins and two seconds from five attempts.

Jack Wong’s determination and patience was rewarded with Happy Fat Cat’s victory in the first section of the Class 5 Chung On Handicap (1200m) for Pierre Ng, who would later celebrate the first double of his fledgling training career.

Sidelined for the better part of this year with a wrist injury, 29-year-old Wong refused to lose belief despite his injury.

“It’s been a long time — June last year was my last winner,” Wong said. “It was so long ago. I then had a problem with my wrist and was off for half a year and then I come back and work hard and try my best and get as fit as possible.

“I try to do more homework and show up as often as possible and try and get more opportunities.”

In his first season as a trainer, Ng registered his first brace when Trader prevailed in the Class 4 Tsuen Wan New Town 60th Anniversary Cup Handicap (1200m) for Angus Chung.

“It’s great to get the first double and it was almost a three-timer with Apache Pass,” Ng said. “It’s been a good night with the double.”

“It’s amazing, big thankyou to Ricky Yiu for supporting me. The horse did a good job, he’s one-paced so I let him go for it. I hope to get more and more wins, get to 200,” Chau said, pointing to the G2 BOCHK Private Banking Jockey Club Sprint (1200m) as his career highlight so far. “Hopefully I can have more wins like that.”