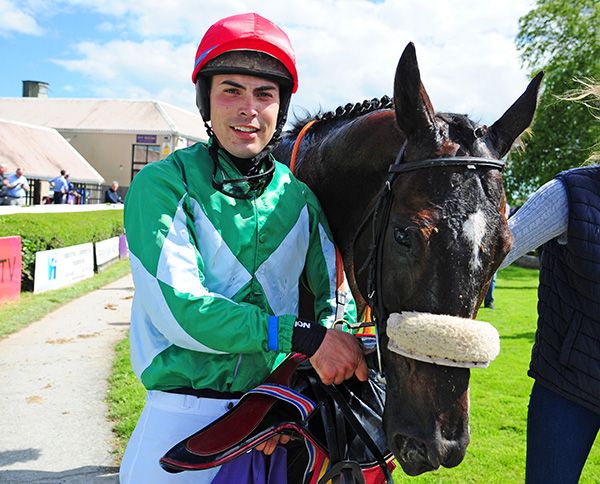 I’m 27 and from Newmarket in Co Cork and we had horses and ponies at home, so I would have started riding them at a young age.

I’m the only one of my family involved in racing although my sister Evanne is a vet in Galway. I did showjumping at first and, with Mick Winters’ yard not too far away from my homeplace, I started riding out there.

I first went to Sweden around seven or eight years ago. I was with Martin Brassil at the time and Martin sent me over to a trainer called Henrik Engblom. I had a fall over there and was out of the sport, and went travelling, for a while. I worked with a couple of farriers in Wexford when I came back to Ireland and then started riding out again and got back involved as a jockey. I want to work as hard as I can to make a serious go of it now.

I’ve been over and back to Sweden since and have ridden several winners over jumps there. The ground is generally quicker than it is here and, of course, nowadays you’re not allowed use your whip. The whip can be carried but not used for encouragement. You can use it for safety reasons if the need arises, but it has to be very clear and obvious that it’s for safety purposes.

It's part of a jockey’s life now, getting used to all the various whip rules in different countries, and you just have to adapt.

I recently rode a winner over fences at Bro Park which is near Stockholm and is one of the main tracks in the country. That was only my third ride over fences. They wouldn’t be as stiff as over here and you can brush through the top of them. I’ll be going back there to ride the same horse later this month and the prize money is not bad at all, maybe just a little bit less than it is here. Kahlil de Burca, an Irishman who used to train in Britain, is involved in training in Sweden now and is a contact that I have there. I get my flights paid and it’s certainly worth my while going over if I can get winners.

I’m currently based in Clonmel and I ride out for lots of trainers around that area. My main ones would be John Flavin, Eoin Doyle and ‘Dusty’ Sheehy. It was great to ride my first winner in Ireland for John at Wexford in June when Bearwithmenow won a three-mile handicap hurdle. That was actually my first ride for John so it was a great start and he’s a very capable operator. I go down to his yard two days a week. With the Tramore festival coming up next week I hope to pick up a couple of rides for these yards.

But I travel all around the country to ride work for different people and hopefully that will result in more opportunities. Ken Whelan is my agent and I don’t have any weight issues for jump racing. I can walk around every day at 9 stone 8lb, no bother. I did have a few rides on the Flat a couple of years ago for Luke Comer which was good experience but doing the weight for Flat racing was a bit of a struggle, so I’m concentrating on the jumping game nowadays.

I love schooling young horses and I’ve done loads of that and always enjoy it. It’s just a case of getting more rides and opportunities on the track. It’s a big help getting to ride and school horses at home that you then end up on in races, because you know what they’re like and how they need to be ridden when you get to the races.

I'm from Goatstown in Dublin. I've always been involved in horses through my parents. My mum had ridden for my grand-aunt a good bit and, when I came along, I started with ponies and I just got bitten by the bug. Then when I was in transition year at school, I was riding a good bit for Buster Harty. I kept ponies there and Buster's daughter, Sabrina, rode out in Dermot Weld's. It was the year of foot and mouth and I was in transition year in school. Transition year was quite boring, so I asked my mum and dad could I stay down in Kildare and ride out with Sabrina for the rest of my transition year for that summer before going back to school. I had never sat on a racehorse before so I did a week with Gerry Stack who was a neighbour of the Hartys. Then I spent that summer riding out and that was really my first introduction to thoroughbreds and the racing industry.

I’m based at the family homeplace just outside Kilcock and I would have started off riding ponies and hunters that we kept here.

I was born in Clondalkin and like a lot of young people I was knocking about on ponies, begging and borrowing to have a sit on a pony somewhere. Then my mum and dad moved up to Athgoe which is near Newcastle, Co Dublin. That was how the connection with Frank Oakes came about because Frank wanted a few stables and we had three or four boxes out the back.

I’m from Portarlington in Co Laois and I first got involved in the racing industry at a very young age through my uncle Tommy who always had a horse or two in training with Seamus Fahey. I was a regular at the weekly point-to-point meets, pottering after Tommy and his late friend Sean Hunt. During the summers I got the opportunity to visit yards with another family friend Martin Brew who introduced me to Con Collins and James Burns to name but a few. It wasn’t long before I caught the racing bug