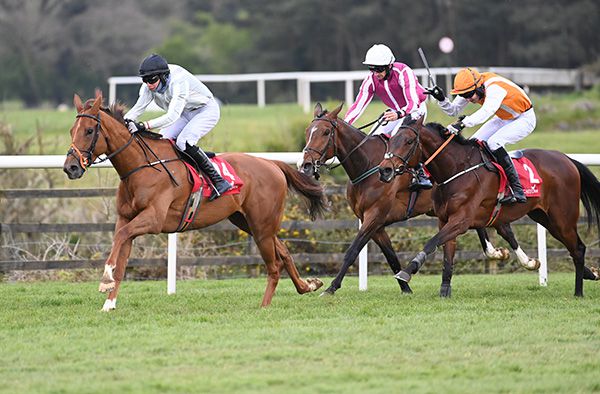 Carrarea's win in the concluding Buggyman (Pro-Am) Bumper at Punchestown today had the hallmarks of a well-executed coup as the Emmet Mullins trained newcomer scored for jockey Philip Byrnes.

The son of Notnowcato was 7/1 overnight, with his supporters 'holding-the-line' until 40 minutes before off-time, at 5pm, by which time he was generally a 10/1 shot.

His price then collapsed, opening 11/2 on the show before returning 5/2 second-favourite, behind Willie The Coo, easy-to-back 9/4 favourite, which debuted for neighbouring trainer Willie Mullins.

In the race Carrarea travelled strongly and while he veered left as he passed the winning line, held off runner-up Naughtinesse by a length and a half.

Carrarea, named after a townland near Tullow, carries the colours of Emmet Mullins' father George and was the second winner of the week for the trainer and 17 year old amateur Philip Byrnes, following newcomer Crowns Major's well-backed Tuesday debut win.

“He's a real nice horse and he's only just coming to himself in the last few weeks.

“I had Patrick trying to persuade me to wait until next week to run him in a four-year-old only.

“He did a very good bit of work at home on Tuesday, we had him entered and he got a run so I felt we had to take our chance.

“He was very green in front and I think there should be plenty more improvement to come with him.”