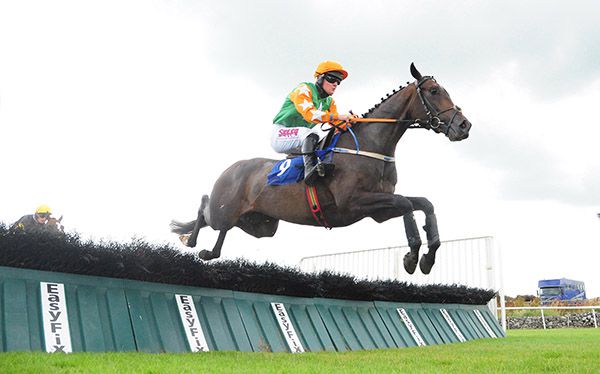 No less than six of these juveniles departed at the first flight and just seven of the 16 runners, who were all making their jumping debuts, completed the race.

It boiled down to a match between Whyzzat and Eternal Presence with the former proving stronger on the run-in.

The 10/1 shot came in by three and three quarter lengths from the 10/3 favourite. Project Two was another three and a half lengths back in third at 50/1.

Jockey Shane Mulcahy said: “He was very free early on and I actually thought we were going too quick. They went a nice gallop to the first.

“It was probably a blessing in disguise that he was free because I was able to get ahead.

“I actually didn't realise until I came back around on the second circuit that there was so much carnage.

“A loose horse joined him coming out of the back straight and that lit him up again. In fairness he stayed galloping and did it well.

“I knew he'd jump well as he had been schooling very well at home.”

Whyzzat was placed on three of his 15 runs on the flat.

The second race on the card was subject to a delay while waiting for the return of an ambulance. Jack Kennedy and Denis O'Regan were both taken to Tullamore hospital for further observation.