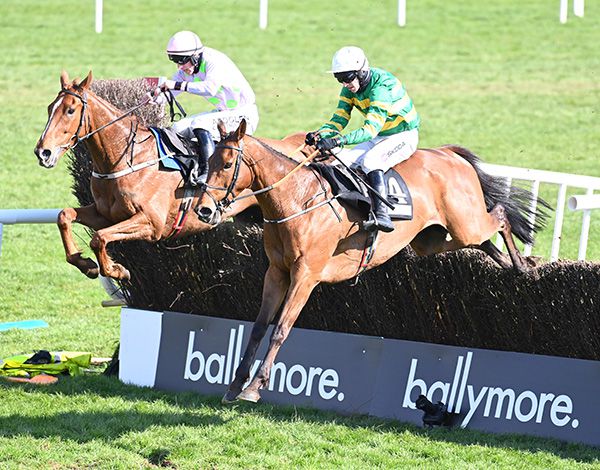 Brian Hayes was the tenth jockey to get on the scoresheet for Champion Trainer Willie Mullins at the Punchestown festival today, steering the Susannah and Rich Ricci-owned top weight to win the Palmerstown House Pat Taaffe Handicap Chase.

The error-prone ten year old made the running and while headed by eight year old Ten Ten at the last, stuck his neck out to edge ahead and win under a strong ride.

Trainer Mullins was equaling his previous best 2018 Punchestown festival score of 18 winners and later commented “Brian is a great chase jockey and comes into his own over fences. I'm very happy to put him up.

“He's a very brave horse and it was a brave ride and the horse just keeps producing. We're very happy to get another winner for Susannah Ricci.”

“That's eight wins from 16 runs for the horse and Brian (Hayes) thought he didn't stay in the Irish National and the better ground was a huge help to him today.”

He added “hopefully we can get owners back and then after that crowds back to inject a lot of atmosphere that is missing at the moment.”

“We've had a fantastic festival, it's great to have the support of the owners that we have and without them none of us could keep going at Closutton. They are the whole part of the team really with the investment they put in every year.

Regarding celebrations, he said “unfortunately it'll be the usual, around the kitchen table!

“We'll have a glass of something and I'm looking forward to a few easy days after the season that was in it.”