Hourigan keeps grandchildren happy with Icee M B A 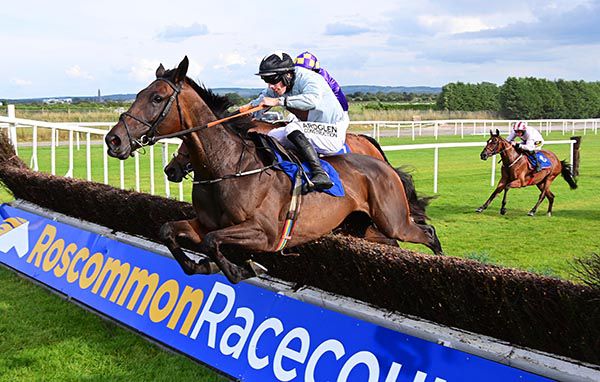 Brian Hayes and Icee M B A
© Photo Healy Racing

Icee M B A brought up plenty of bets when obliging on her second start over fences in the mares' beginners' chase in Roscommon.

She progressed to lead after two out but was strongly pressed by That's Lifebuoy at the last. She jumped it better than that rival and was driven home by Brian Hayes.

She won by a length and a half from That's Lifebuoy (5/1). The Sliding Rock, 5/4 f, was six and a half lengths adrift in third.

“She always showed a bit and she should have won a point-to-point last year when unseating,” said Hourigan.

“It was nice ground that day in Boulta and the ground is the key to her. I decided I'd go during the summer with her and she's been good.

“Her jumping is very good, she's brilliant, and she has a great head on her.

“She's bred to win an Oaks but she cost nothing. I bought two fillies at the sales the same day for peanuts and I said I'd give them to the grandchildren. She's named after the seven grandchildren I had at the time, that's the initials of them all.

“I'd like to be at home now to hear them roaring at the television!”

This former handicap hurdle winner was third on chasing debut at Limerick in July.