Favori Logique off the mark in Roscommon 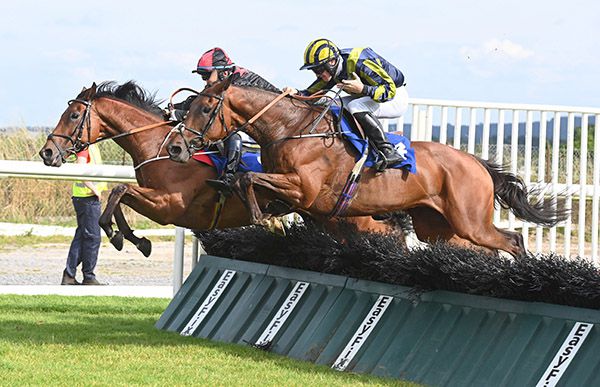 Favori Logique, near side, delivers his challenge over the last
© Photo Healy Racing

Favori Logique, the 11/8 favourite, wore down Vale Of Glory to take the spoils in the Dysart Maiden Hurdle at Roscommon.

Vale Of Glory (250/1) put in some performance off an absence of 665 days as he held the advantage over the last couple of hurdles.

It was on the run-in that Favori Logique collared him and went on in the closing stages by two and a half lengths under Shane O'Callaghan. Plan B (7/2) came in third, a further six lengths away.

Trainer Ross O'Sullivan said: "He's been knocking on the door and he deserved his turn as he's been a very consistent horse.

“The boys bought into him on his second last run. They are local lads to me, from Wicklow and Kildare.

“He was second the last day and won today. It's great for Shane, who works for Ted (Walsh) and gave him a great ride.

“He's a horse that has a mark over fences as well and will be a right fun horse. He has plenty of options.

“Once or twice he disappointed us on heavy ground and I'd say we wouldn't go back to that.

“His form in winter maiden hurdles was very good and it's great he got his turn.”