David O'Brien has his string firing on all cylinders 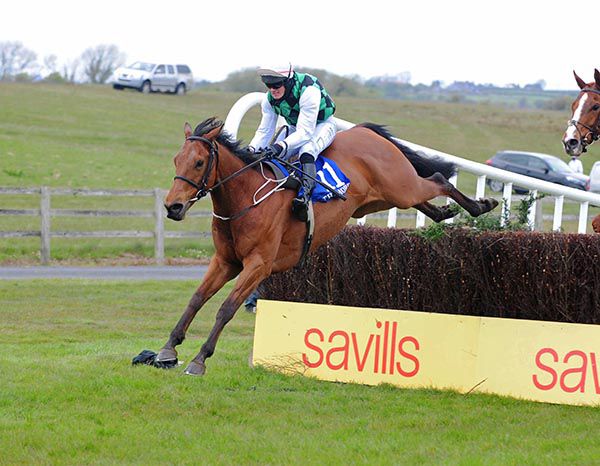 Thankfully Rachael Blackmore and Mark Walsh were up okay after a nasty last fence incident in the Green Acre Marketing Handicap Chase at Tramore, an event that went the way of My Oakclahome.

The winner was a well-backed 9/2 chance for David O’Brien and Ryan Treacy, and he delivered from the front.

O’Brien, fresh off a success at Ballinrobe on Friday evening with Minx Tiara, saw his My Oakclahome ultimately hold off Demain Des L’aube by a length.

Blackmore’s mount Game Of War was making no impression in fifth when falling at the last and Kitten Rock (Mark Walsh) was brought down.

"That was great. I am delighted for his owner who hasn't been well and it's great to get him a winner. Denis (Tarrant) has been there since my father's time and he is a very loyal man. He bred the winner too so it will give him a lift," said O'Brien.

"He likes being up there towards the front. I ran him in Limerick and I shouldn't have, the ground was too soft for him. Even though he is a strong horse he just doesn't handle it.

"He was unlucky here last year when he got in under the last and the winner got a flier. He had a little bit of leg trouble then but we got him right and he will probably go for something similar again now. Hopefully we will get another one out of him."

The Stewards interviewed G. Cromwell, trainer of Brex Drago, concerning the late withdrawal of his charge owing to the ground. The trainer reported that it was his intention to run his charge who was present at the track. Having walked the track, he felt the ground had dried significantly to the extent that it was too quick for his charge on parts of the track. Having considered his explanation the Stewards allowed the late withdrawal on this occasion and took no further action.

Tauran Shaman had proved expensive to follow since successful on his opening two starts in 2019 but got it all together when landing the Ballinteer Handicap at Leopardstown this afternoon.